In order to repatriate funds from India, government allow an NRI to open rupee account in any authorized banks of India. For such repatriation, NRI has two options for opening a bank A/c.

In order to keep India based earning in India; NRI can open an NRO account in any authorised bank and start depositing India earning in it.

Similarly, to repatriate overseas earned money back to India, an NRI has to open NRE account in any authorised bank in India. 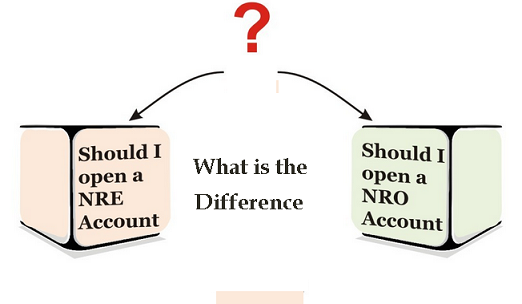 There is a repatriation limit on NRO account. An NRI can repatriate up to an overall ceiling limit of USD 1 million per financial year. If the source of funds that is about to be transferred is taxable in India then a chartered accountant‘s certificate along with form 15CA and other documents are to be submitted for transferring money.

In case of NRE Accounts, there is no repatriation limit. An NRI can freely repatriate his principal deposited amount along with interest from India.

Income tax on interest from NRO and NRE account

Interest rate on NRE Account is generally less compare to NRO A/c. However, banks have liberty to choose their own interest rate for NRE accounts. An NRI can compare interest rates and choose the right bank before opening such A/cs