Cheque is a document which guarantees the payee or bearer to get paid for a specific amount from the payer’s bank account. Your bank on demand from payee or bearer pays the specified amount after cross checking your signature with bank’s database.

After opening your saving bank account or current account, you will be issued a bunch of Cheque leaf. These leafs can be used for making payment to your vendor or to pay your bills.

There are different type of cheques which are defined based on how you issue it, where as basic format remains same.

In this article we will be discussing 6 verities of cheques that are issued in India. 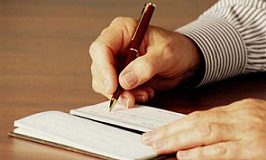 On your Cheque leaf you can find a word “Or Bearer”. If you do not strike out this word while issuing then it becomes a bearer Cheque.

Bearer Cheque means the person who is holding the instrument can withdraw amount from your bank account.

Issuing these types of bearer cheque is risky as you never know when your payee will misplace it. In such type of circumstances the finder can collect the payment from bank.

Crossing a Cheque means you are instructing the bank to make payment to the payee’s banks account only. You can cross it by adding two parallel lines on the top left hand corner of the Cheque.

Payment for this type of Cheque can not be obtained from the cash counter of your bank account.

After depositing it with a bank, the bank will submit it to the nearest branch of payer’s bank and then you will be paid after getting it paid from payer’s bank to your bank. You can also write “A/c Payee” in between the crossed line.

While issuing if you do not cross the Cheque then it will be called Uncrossed Cheque. Its also called open Cheque which is not required to be paid to payee’s bank account.

In self cheque, you can issue it in your own name or write self in the palace of writing Payee’s name. The person who is holding the instrument can go to the payer’s bank and withdraw the amount that is mentioned there in.

It’s a very risky instrument as the owner has not been defined in it. In case you misplace it, then the other party holding the instrument can claim his ownership.

In such types of situation, you have to inform the bank and payer to block it by giving the cheque number to them. This type if instrument can only be paid by payer’s bank. You cannot get it paid from any other banks.

In case of order Cheque, the payee in whose favor the Cheque has been issued can only withdraw the amount. If the payee wants then he or she can authorize someone to collect the amount on his behalf. It will become an order cheque only when you strike out the word “OR BEARER” part after writing the party name in it and have not crossed it on the top left hand corner.

A cheque issued today will be valid for 3 months from the date of issue. In case someone wants to take payment on a future date i.e. after 3 months time period or the party has requested to have a higher validity period then you can issue a post dated cheque by quoting a future date as per your convenience.

Cheque will change its functionality based on how it’s issued. You have to be very careful while drafting a cheque or else there are chances of losing your hard earned money.

Also Read: 5 things to remember while filling out a cheque