Employers including an individual or HUF who are responsible for paying any salary to any of their employee has to compulsorily deduct TDS from salary paid, if such salary amount is exceeding the basic exemption limit applicable to the financial year.

As per section 192 of income tax act, TDS on salary has to be deducted at the time of payment to employee. TDS will not be deducted if salary for the month has not been paid to employee. 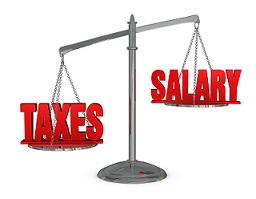 The employer in the above case has to make an honest estimate. The onus to prove that the estimate is bona fide is on the employer.

While calculating TDS on salary employer has to consider income tax including education cess and SHEC i.e. the amount of tax payable should be increased by education cess @ 2% and SHEC @ 1%.

TDS on salary in the case of non monetary perquisite

However the tax amount paid by the employer on non monetary perquisites will not be allowed as business expenditure while calculating income tax liability of the employer. – Section 40(a) (v) of income tax act, 1961.

Employer also has option to deduct tax from such non monetary perquisite instead of paying it from own pockets.

When TDS on salary has to be deposited

Deposit of TDS on salary depends on the type of employer who deducts tax from salary of the employee.

TDS deducted by the office of Government

Where TDS on salary has been deducted by an office of the government from its employees then such TDS amount has to be deposited;

TDS deducted by other employers

Where TDS on salary has been deducted by an employer other than the office of government then TDS amount has to be deposited;

TDS on salary can be deposited quarterly if the assessing officer with the approval of joint commissioner allows the employer to do so. After such approval TDS has to be deducted on July 7, October 7, January 7 and April 30th for their respective quarters.

After depositing TDS with income tax department the employer need to file quarterly TDS statements in form 24Q on or before following days;

If TDS on salary has been deducted by an office of the government then it has to be filled on or before following days;

Certificate of TDS on salary

Form 16 as a proof of deduction of TDS on salary has to be issued by the employer to employee with the salary break up in form 12BA. Such certificates are to be issued before 31st may after the end of the financial year.

If you are eligible for any relief under section 89 of income tax act then you need to furnish such details to your employer in form no: 10E. Employer has to consider such relief amount and calculate income tax liability accordingly.

The information available through this Site is provided solely for informational purposes on an “as is” basis at user’s sole risk. The information is not meant to be, and should not be construed as advice or used for investment purposes. Yourfinancebook.com does not provide tax, investment or financial services and advice. We make no guarantees … END_OF_DOCUMENT_TOKEN_TO_BE_REPLACED